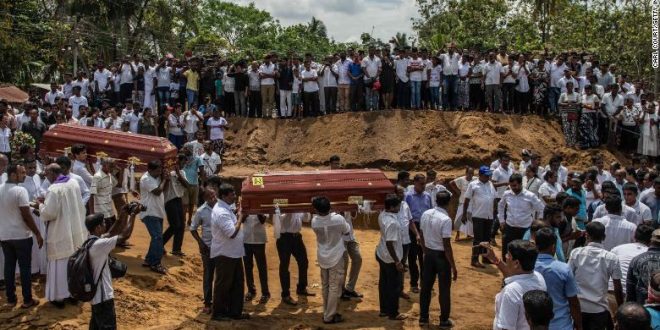 NEGOMBO, SRI LANKA - APRIL 23: Coffins are carried to a grave during a mass funeral at St Sebastian Church on April 23, 2019 in Negombo, Sri Lanka. At least 311 people were killed with hundreds more injured after coordinated attacks on churches and hotels on Easter Sunday rocked three churches and three luxury hotels in and around Colombo as well as at Batticaloa in Sri Lanka. Sri Lankan authorities declared a state of emergency on Monday as police arrested 24 people so far in connection with the suicide bombs, which injured at least 500 people as the blasts took place at churches in Colombo city as well as neighboring towns and hotels, including the Shangri-La, Kingsbury and Cinnamon Grand. (Photo by Carl Court/Getty Images)

On April 21st, 2019, more than 250 people were killed in coordinated terrorist attacks in Sri Lanka on Easter Sunday, thousands of security forces have fanned out across the country in a massive operation intended to neutralize the ongoing threat of another attack. Late in the evening, at least 15 people, including six children, were killed in gun battle with explosions in the town of Sainthamaruthu, where police said a group tied to the Easter bombings was hiding out.

After this attack, President Maithripala Sirisena said officials would restructure Sri Lanka’s security forces to try to better protect civilians, declaring the whole ordeal the result of a major intelligence failure. The country’s defense secretary and police chief resigned this week. He claimed: “ The government had been warned of the attacks but did not say a word about this warning letter. It was also a serious lapse on their part and shirk of responsibility”.

Danish clothing retail billionaire Anders Holch Povlsen, one of Scotland’s biggest landowners who lost three of his four children in the Sri Lanka attacks, is a reclusive businessman who has jealously guarded his family’s privacy over the years. The 46-year-old was on holiday in Sri Lanka with his wife and their children – a boy and three girls aged 5 to 15 – when suicide bombers struck churches and luxury hotels, killing more than 320 people. The billionaire faced a morbid question: Could the carnage have been stopped before it ever started?

It’s a question intelligence officials around the world grapple with in the aftermath of every deadly terrorist attack — from 9/11 to the Paris attacks, the Manchester Arena bombing and beyond. “Any terrorist attack is by definition an intelligence failure,” said Raffaello Pantucci, director of international security studies at the Royal United Services Institute for Defense and Security Studies in London. “Intelligence’s job is to stay on top of these problems and stop them from happening.”

After the 9/11 attacks, the United States launched the National Counterterrorism Center in an effort to close intelligence gaps and ensure incoming information was being appropriately processed. In 2016, months after deadly terrorist attacks rocked Paris, French lawmakers urged a similar solution, suggesting leaders merge France’s intelligence agencies to ensure stronger monitoring of potential terrorists. Last year, British lawmakers determined that British intelligence failed to recognize the level of danger posed by Salman Abedi, the bomber who killed 22 people at an Ariana Grande concert. “[A]s a result of the failings, potential opportunities to prevent [the bombing] were missed,” lawmakers said.

There is no doubt that the attacks in Sri Lanka were also an intelligence failure, Pantucci said. But it’s a good sign, he noted, that officials were at least familiar with the local group, National Thowheed Jamaath, that they say was responsible for the attacks. That they were able to quickly make a number of arrests signals they at least had some individuals on their radar before the attacks occurred. The Islamic State has also claimed responsibility for the attacks, but it’s not entirely clear what role it may have played.