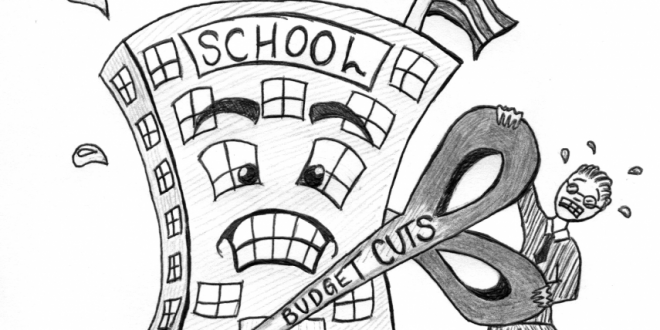 A Closer Look at Budget Spending Decreases in Education

It may come as no surprise, that with our approaching $17 trillion debt—that is, greater than the entire US Gross Domestic Product, which is now estimated at around 13.7—that we have now come face to face with an interesting dilemma: what, exactly, must we choose to cut from our federal budget so as to close this ever increasing gap?

Surprisingly, for some, the answer has been education. January of this year began a $1.2 trillion dollar budget cut across the board, spread out over ten years. According to Mary Kusler, government relations director of the National Education Association, “more than 9 million students would lose essential services. Head Start cuts would eliminate slots for almost 80,000 young children in early education programs. Nearly $1 billion in cuts to IDEA would impact almost more than a half a million students with disabilities. Education programs for homeless children would be cut by $5.3 million. School Improvement Grants would be cut by $44 million, hurting 67,000 students in our neediest schools.”

While these facts and statistics appear daunting and formidable, it is not only federal education budget cuts of which we must be wary. In fact, many state governments, California’s included, have enacted more education budget cuts. But while we could again discuss daunting numbers, what exactly do these budget cuts mean for the next generation of students?

Even in affluent communities like the Bay Area, middle schools have witnessed an alarming decrease in the number of elective courses available to students. At Kennedy, a local middle school, after many courses were cut, students face a difficult choice between the electives wheel and band—and for those who have no talent for music, that is no choice at all.

At the high school level in the Bay Area, despite the strong presence of DECA, a 1,000 member strong Career Technical Student Organization in the Silicon Valley alone, the Santa Clara County Career Technical Education Department has also been cut, due to changes in the budget. More evidently, students will begin to see larger classrooms, fewer teachers, and more, raising ominous questions about just how low our high school graduation rate will drop in the future.

These alarming trends in public education continue on to the college levels as well. More and more college campuses have become “impacted”—meaning, there are too many students that must be supported by the ever decreasing educational budgets. As a result, some college freshman students are no longer able to spend their first year in college in dorms, but must instead seek off campus housing. It has been increasingly difficult to get into the classes that students want—there are just too many students. As class sizes have increased to sometimes as many as 800 students, faculty and staff have had to take on the burden of an ever increasing workload as well. The overall California college graduation rate is a meager 38%. Less than half of California students entering college graduate in four years. With this daunting thought at the forefront of our minds, we can’t help but think–what will the future hold?

It is clear that educational budget decreases have left far reaching results, both nationally and locally, that can be seen from our youngest students to those already in college. The question we will have to answer for ourselves: are the budget cuts truly worth it?

Next Quick Thoughts on the Implementation of Common Core Standards