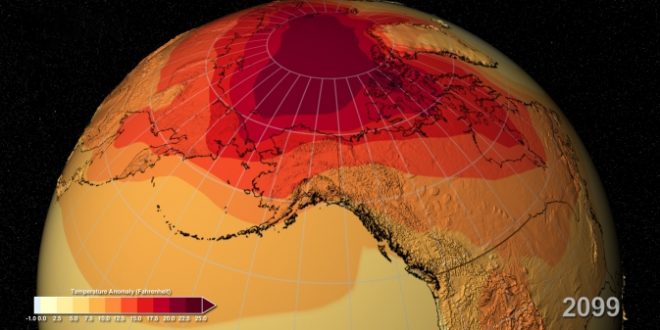 It is no secret that weather patterns are becoming increasingly erratic. Chilly weather and summer rains in California and increasingly powerful hurricanes in the tropics are clear signs of this change. Many scientists, among others, attribute the changing climate to a greater problem of human-caused global warming, warning of the imminent doom of the earth. However, still others claim that the changing weather patterns are not caused by humans, instead diminishing the effects of changing climate or attributing the changes to non-human sources. Some, such as our president, go as far to claim that global warming is a foreign-created hoax. Global warming poses a legitimate threat to the earth, but its consequences in the present day are miniscule compared to its consequences for future generations.

According to a chart of global temperatures over the past 125 years there has been a gradual increase over the first 100 years with a dramatic increase over the most recent 25 years. With no precedent to the recent explosion in temperature, it is almost certain that it will not stop anytime soon. Though the increase in temperature amounts to less than one degree Celsius, the the change is measured as an average; the change in temperature varies wildly from place to place, creating extreme weather changes. In fact, a United Nations report “projected sea level gains of 18-59 centimeters this century from temperature rises of 1.8-4.0 Celsius,” which would devastate the “100 million people around the world [living] within a meter of the present day sea level”. From a change in temperature of what most would consider less than the difference between a high and low temperature on a given day, entire nations could be decimated in the future. Though the signs and effects of global warming are somewhat insignificant in the present day, they foretell an upheaval that will be felt for generations.

Furthermore, many believe that the small changes of the present day will not have any significant effect on global warming. Countering another claim about the significance of carbon dioxide, “[it] is not the major greenhouse gas (water vapor is)”. While water vapor may not be the major greenhouse gas, this does not diminish carbon dioxide’s ability to act effectively as one. The implication that a small change in a small aspect of the earth’s environment cannot have a great effect is erroneous and dangerous to all people. Former US Vice President Al Gore warns, “We are dumping so much carbon dioxide into the Earth’s environment that we have literally changed the relationship between the Earth and the Sun”. Not only is this a disquieting development about the state of the earth, it implies that carbon dioxide’s effect as a greenhouse gas is becoming increasingly potent. Thus, small changes to the current environment, in fact, will have dire ramifications that are only beginning to emerge.

In conclusion, global warming is a great threat, and should thus be treated as such. The warning signs have been more or less insignificant to the untrained eye, but are growing such that if not halted, they will devastate the earth of the future.