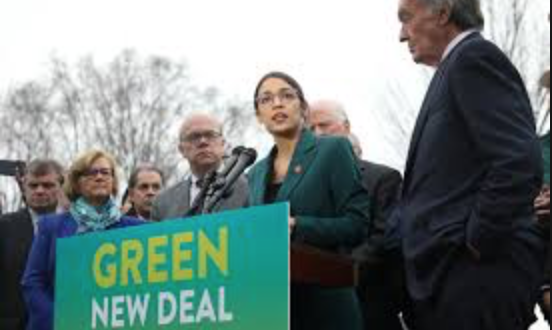 Green Deal: Yes or No?

Although environmental groups throughout the world are trying to make a difference with their own individual initiatives, it is ultimately the federal governments of the world that need to make the big decisions on the direction environmental legislation will take. The environment and climate change have been hot topics of discussion recently, as the Green New Deal is attempting to make its way through Congress. Conservative Republicans are fortifying their defense against these “liberal” initiatives because they believe that environmental spending will be detrimental to the U.S. Economy.

Sponsored by Democratic Representative Alexandria Ocasio-Cortez and Senator Ed Markey, the Green New Deal is a stimulus program that aims to address climate change with public works projects and social reform. Originally seen in Franklin D. Roosevelt’s new deal, the economic approach used for the Green New Deal combines old economic reform ideals with new ideas such as renewable energy and resource efficiency. The approach hopes that in the years to come, the United States can eventually use 100% renewable, zero emission energy sources. Electric cars and high-speed rail systems are current inventions that are environmentally safe alternatives that are supported under the Green New Deal.

Many members of Congress are on the opposition to the Green New Deal because of the alleged impacts that it will have on the U.S. economy, and its potential blind spots. Critics claim that the Green New Deal will not have a big enough impact, as it can only change the way people live, not where people live. In other words, changing to electric transportation or other methods will not reduce oil consumption to levels that will actually make a difference. Only by switching factories and other manufacturers to renewable sources will there be a difference. However, supporters of the New Deal claim that a change should be made when the American public is willing to accept it, and that time is now. The economy is at a high, with unemployment at a nominal 4%, and Americans are willing to make concessions to economic growth for spending on environmental issues.

The debate on the Green New Deal will likely carry on to the 2020 Election and onwards, and it is still to be seen whether the initiative will garner enough support to pass in the years to come.

Previous The Future of Meat
Next Money Can’t Bring Happiness, but Exercising Can