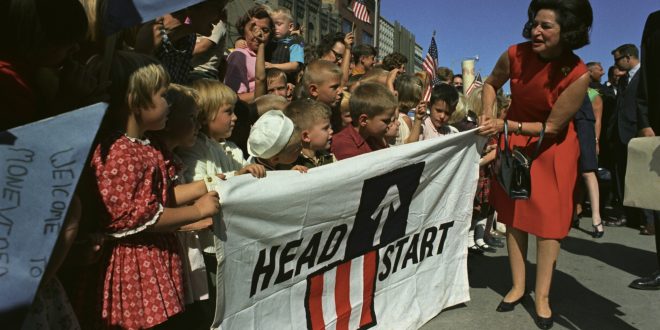 Helping Kids Get a Head Start

Lyndon B. Johnson ascended to the presidency after President Kennedy’s death, bringing with him new policies to fight poverty and racial discrimination under a blanket term, “The Great Society.” As president, Johnson instituted the Great Society reforms to aid underprivileged schools, focusing especially on younger children. This led to the creation of the Head Start program, which provides comprehensive care for preschoolers with low-income families. Low-income families struggle to send their children to preschool, making the transition into elementary school even more difficult for impoverished communities. Thus, Johnson created the Head Start program in hopes of helping younger children get a “head start,” starting education early and hopefully aiding in prolonged participation in education programs, decreasing high-school and college dropout rates and ultimately cracking down on American poverty.

The Head Start program began as an eight-week summer program under Dr. Robert Cooke from John Hopkins University and Dr. Edward Zigler, a psychologist and director of the Yale Child Study Center, but Head Start quickly expanded into a year-long program, where it now resides under the jurisdiction of the Department of Health and Human Services (DHHS). Currently, Head Start serves over 1 million children and families around the United States, including territories such as Puerto Rico. Head Start also provides health services, such as preschool health screenings, check-ups, and dental work, while Head Start workers provide counseling for parents.

Head Start is generally regarded as an effective educational program. In 2009, David Deming compared siblings of families under Head Start and discovered that siblings who attended Head Start were more academically skilled than their non-participating counterparts, making them more likely to graduate from high school and less likely to commit crime. In 2015, CCR Analytics published the results of a survey the company conducted for 11,900 California Head Start parents. A vast majority of them (i.e. greater than 90%) claimed reported that Head Start had helped them maintain jobs, enroll in education programs, and improve parenting skills. Thus, the Head Start program reflects the American government’s commitment to education and the war on poverty, two items on many political agendas that remain relevant today.

Previous NBA Championships
Next A Wedding Gift From the Queen: A Ghost Castle