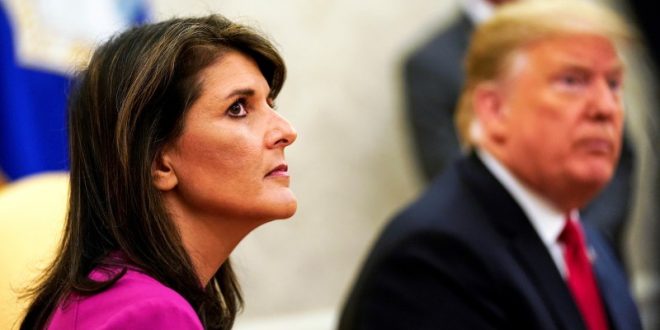 U.S. President Donald Trump meets with U.N. Ambassador Nikki Haley in the Oval Office of the White House after it was announced the president had accepted the Haley's resignation in Washington, U.S., October 9, 2018. REUTERS/Jonathan Ernst - RC16DEB98350

Trump took to social media beforehand, tweeting he would announce a significant decision with “My friend Ambassador Haley.”

According to the Oval Office announcement, Haley would leave the UN position at the end of 2018.

After news had broke, Trump said that Haley is a “very special” person who completed an incredible job, and hopes she will return in another government role in the future. Haley has is no plan to run in 2020’s presidential election, but will still campaign for Trump.

Haley cites no personal reasons in her resignation. Her official announcement claims she felt that her work previously as governor of South Carolina and UN ambassador has left her satisfied, and it was time for others to take over, mentioning the importance of knowing when to step down.

According to The Wall Street Journal, Haley’s decision to resign also surprised the United Nations. A diplomat on the Security Council said that Haley had never revealed any desire to resign, nor did she inform UN Secretary-General Guterres in advance.

Previous What is Senioritis?
Next The Trade War