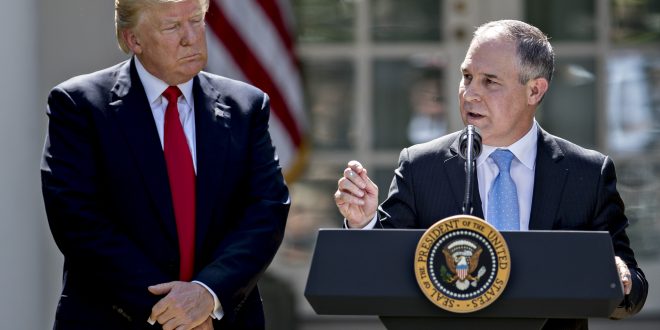 Scott Pruitt, administrator of the Environmental Protection Agency (EPA), speaks as U.S. President Donald Trump, left, listens during an announcement in the Rose Garden of the White House in Washington, D.C., U.S., on Thursday, June 1, 2017. Trump announced the U.S. would withdraw from the Paris climate pact and that he will seek to renegotiate the international agreement in a way that treats American workers better. Photographer: Andrew Harrer/Bloomberg via Getty Images 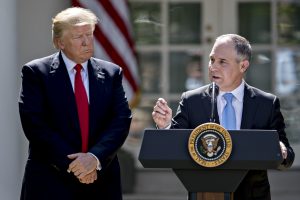 Scott Pruitt, the current head of the EPA who was appointed by President Trump, has already become a controversial figure. He does not believe in the link between human activity and climate change. He has been working with President Trump to diminish the EPA’s impact and regulations. He has also supported Trump’s decision to withdraw the United States from the Paris Climate Agreement. In short, Pruitt is nothing like a traditional EPA official. Recently, he has caused more waves in the environmentalist community, angering and shocking many. His controversial decision? Replacing many EPA scientists with 66 industry experts—largely from the mid-west—on science advisory boards.

Specifically, these replacements come from a new policy of Pruitt’s. The new policy basically states that anyone who receives research funding from the EPA cannot serve on the EPA’s advisory board. At least seven have resigned in order to keep their research funding. Those who stay on the board have to stop most of their research as they are funded by the agency, effectively slowing down any research progress on climate change and other environmental dangers. The new policy is so detrimental that it will nearly halve the number of university scientists and triple the number of industry and consulting scientists.

Pruitt claims that this move would serve to “diversify” the boards and bring in “new” perspectives; however, he fails to mention that these “new” perspectives come from the companies that the EPA is supposed to regulate. These “new” perspectives also mainly come from the mid-west, which could placate the mid-western voters that largely make up Trump’s base. While Pruitt may spout whatever nonsense he wants to in order to justify this action, his move only seems to align the EPA more with Trump’s agenda: promoting industry over everything, including the environment.

If Pruitt continues to dismantle and degrade the EPA, can it even still keep the “environmental” part of its name? At this rate, in four years, the EPA would just become a farce of an environmental agency, letting various industries to have their way.

Cindy is senior at Henry M. Gunn High School and is incredibly honored to be a part of the Rising Star Magazine team. She enjoys belting out Disney songs, playing piano, watching Chinese dramas, and babysitting. Cindy serves as California DECA's VP of Silicon Valley and is also the singing teacher at FCSN and the President of HEARTS Nonprofit. She can be contacted at cindy@risingstarmagazine.com
Previous Black Licorice: Trick or Treat
Next Can Star Trek: Discovery Maintain Star Trek Appeal?