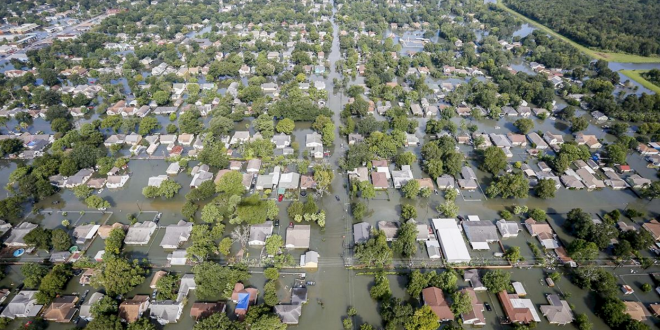 How Rare is Hurricane Harvey, Anyway? 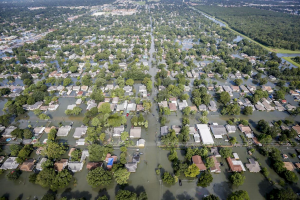 It’s important to note that Hurricane Harvey did not come storming in without notice, for its predecessors rocked communities just months and years before.

Last year, a “1,000-year” rainstorm—supposedly one that comes every thousand years—inundated Baton Rouge and seven southern Louisiana parishes; in 2013, Colorado’s arid Front Range quaked under a year’s worth of rain that came down in five days; and this summer, India, Nepal, and Bangladesh have all felt the devastating effects of extreme monsoons.

“Every location on the planet is at risk in this regard,” comments Michael Wehner, a senior staff scientist at the Department of Energy’s Lawrence Berkeley National Laboratory. “The important thing in my mind is to raise awareness that everybody should expect more extreme storms, no matter where they live. A key question for Houston’s urban planners is just how rare an event do you design for?”

During one five-hour period, the Houston rain surpassed the average amount expected for a year in Los Angeles. Unlike LA, however, the city that sits on the hurricane-inclined Gulf of Mexico is not new to heavy precipitation and flooding. In the 1920s and ‘30s, the Harris County Flood Control District was created in response to chaotic floods. The flood-control network managed by the district, consists of over 1,500 channels and a 150 water-level sensors (to warn residents in the event of approaching flooding). These were the sensors that made it apparent that Houston’s water infrastructure stood no chance against Harvey’s rain, halfway through the storm.

Harvey is the third “500-year” flood to wreak havoc on Houston in the past three years—in three years, three floods that were to each come once every 500 years did what seemed impossible.

If heavy rain is becoming more and more prevalent, what do cities do? Do they apportion more money toward preventative infrastructure? If so, another question arises: how much is enough?

Global warming is likely hastening the floods’ clocks; it’s no coincidence that “500-year” and “1,000-year” floods in rapid succession. Now, the Gulf of Mexico’s surface waters are 2ºF higher than they were at this time thirty years ago—there is more water vapor in the atmosphere because of increasing evaporation and warmer air being able to hold more vapor than cold. Hurricane Harvey is making use of that increased vapor.

According to Risk Management Solutions (RMS), Houston is looking at losses as high as $70-$90 billion from Harvey, mostly due to flooding and the destruction in an area where over seven million properties are valued altogether at more than $1.5 trillion. The properties, sitting atop land paved over swamp and wetlands, caused their destruction by themselves—without the swamp and wetlands, the land suffers from an inability to act as a sponge in the event of extreme rain.

“Most development does not take these risks into account, predominantly because of the cost,” says Alex Kaplan, an executive at the global reinsurance giant, Swiss Re, which urges communities to prepare for climate change or otherwise risk losing insurance. “A dollar today is worth more than a dollar saved tomorrow.

Events like Hurricane Harvey force communities to look at their infrastructures more warily; however, at the end of the day, governments act upon political will. The construction of, say, a football stadium will always be more enticing than rebuilding old sewers—but there’s no point if the football stadium will simply be destroyed in an inevitable storm.

Thankfully, the frequency of natural disasters have spurred cities to take charge. For example, Copenhagen built parks and public spaces where rainwater can collect after suffering from 100-year floods in 2011 and 2014. It also fixed the piping in the storm sewer system such that it’d be able to move excess water to places where it can drain.

The Dutch are employing a similar method, but to a heightened degree: the Dutch approach involves letting water flow where it will reap no harm, rather than simply plugging it. The Netherlands is drowning not in water, but in features that double as water storage ponds—lakes, seaside parking garages, city plazas, and more. As a result, cities like New Orleans and Miami are following in the Dutch’s footsteps.

Back on American soil, we can see cities taking up their own initiatives as well. In Colorado, the city of Boulder produced a comprehensive plan to adapt to climate change after their flood. The plan covers not only flood control measures, but also considerations toward the increasingly problematic threat of wildfire.

Although Harvey broke a number of records concerning the rainstorm enterprise, the future only has in store more treacherous natural disasters in the wake of climate change. It’s time to pay that dollar forward for preventative measures—before it gets washed away.

Cindy is senior at Henry M. Gunn High School and is incredibly honored to be a part of the Rising Star Magazine team. She enjoys belting out Disney songs, playing piano, watching Chinese dramas, and babysitting. Cindy serves as California DECA's VP of Silicon Valley and is also the singing teacher at FCSN and the President of HEARTS Nonprofit. She can be contacted at cindy@risingstarmagazine.com
Previous Hurricane Harvey: Short-term Effects
Next The two leading airlines of Japan