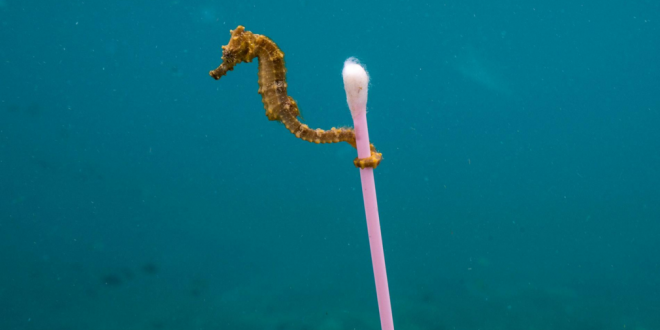 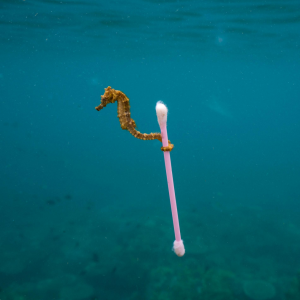 Near the town of Sumbawa Besar in Indonesia, photographer Justin Hofman and wildlife spotter Richard White, along with others, take a break from their expedition to do some snorkeling at the reef.

“The reef was actually in surprisingly good shape. It was devoid of big fish though the corals were thriving,” Hofman notes.

White spots a seahorse drifting near the surface, and the two continue to pleasantly watch the seahorses drift by. Seahorses ride the ocean currents by grabbing onto floating objects using their tails. Soon enough, amusement turns into outrage as the seahorses’ objects of choice move from bits of seagrass to plastic and unnatural debris.

“It’s a photo that I wish didn’t exist, but now that it does I want everyone to see it,” he wrote on Instagram. “What started as an opportunity to photograph a cute little seahorse turned into one of frustration and sadness as the incoming tide brought with it countless pieces of trash and sewage. This photo serves as an allegory for the current and future state of our oceans.”

While the pictured seahorse continues its lifestyle with ocean pollution, many other populations of seahorses are not as lucky. The seahorse is particularly vulnerable to ocean pollution—with limited ability to swim, they are unable to quickly escape a polluted area. Even if they are able to escape, pollution effectively eradicates extensive swaths of seahorse habitat: coral reefs, mangrove swamps, and seagrass beds. In fact, around 20% of the world’s coral reefs have been destroyed from pollution with more in tow.

It’s time to stop (sea)horsing around with our ephemeral oceans.

Cindy is senior at Henry M. Gunn High School and is incredibly honored to be a part of the Rising Star Magazine team. She enjoys belting out Disney songs, playing piano, watching Chinese dramas, and babysitting. Cindy serves as California DECA's VP of Silicon Valley and is also the singing teacher at FCSN and the President of HEARTS Nonprofit. She can be contacted at cindy@risingstarmagazine.com
Previous Synthetic and Whole-Food Vitamins
Next CTE Courses: What are they and why are they important?