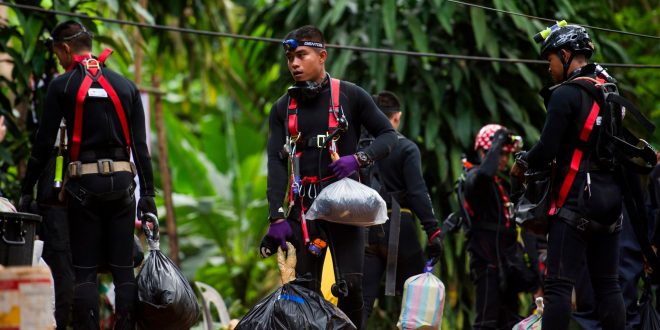 An all boys soccer team and their coach has gone missing in the Tham Luang Nang Non cave complexes in northern Thailand as of June 23th. The team, with kids ranging 11 to 15 years of age, have been trapped in the cave for what has now been nearly three weeks.

Officials at the local police station were alerted when the boys did not come home from practice. The search quickly grew to international levels, with the involvement on six countries who sent  cave divers and specialized teams. Two British divers first discovered the team and coach nine days after their initial disappearance. They were extremely weak, but in stable condition. Their survival thus far has been attributed to the fact that they were in very good shape due to their soccer training. Supplementary food and medication have been provided to the team and the coaches.

Divers are concerned about the difficult cave route. After the initial discovery, there were several other dives in an attempt to find a safe exit pathway. These divers have described the near three mile journey to where the soccer team is located challenging; they are frequently operating in total darkness and tight passageways. Not to mention, none of the team members nor the coach have much – if any – experience with cave diving. This will make extracting them even more difficult.

Thailand’s monsoon season is fast approaching, and the oxygen level in the cave is dropping. It is now at 15%. There is supplemental oxygen being pumped in, but authorities and experts worry about hypoxia. This, combined with the rising water levels is a less than ideal setting for a rescue attempt.

The rescuers have worked out a very impromptu buddy system, where a professional will accompany and guide each child through the arduous journey to the cave entrance. It is slow going, due to the team’s inexperience and their prolonged stay in the cave, but officials remain hopeful of the team’s survival.