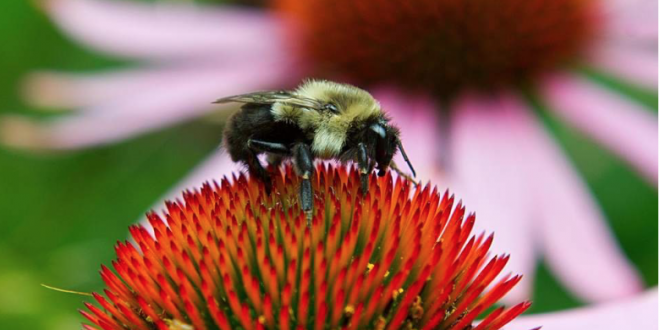 The Birds and the Bees

Despite their obvious necessity, bees have been dying off quickly.  Recently, a year of pesticide use destroyed 44% of US bee colonies, and 7 species of bees are on the endangered species list.  European countries have even cited a 75% drop in insect populations in the past 30 years. Ironically, these creatures meet their deaths in the process of helping create the very food we eat.  Pesticides and neonics weaken their immune, nervous, and reproductive systems, causing entire colonies to perish– otherwise known as colony collapse disorder. Kimberly Amadeo writes, “If colony collapse disorder continues at the current rate, managed honey bees will disappear by 2035.”  Neonics in particular are so dangerous to not only bees but humans, that the EU and Canada are banning their widespread use. Maryland and Connecticut have followed suit, and many states are considering doing the same. However, the House of Representatives has passed a bill that protects pesticide companies as they kill off the bees we have left.  This farm bill would exempt companies from having to follow restrictions under the Endangered Species Act.  As long as the EPA approves a chemical, pesticide companies may now use it without liability, despite research proving the pesticide is deadly to bees.  If Congress passes this bill, bees will die out quicker than Kimberly imagined.

It is essential that we ban the sale of neonics immediately- but they are not the only chemicals causing problems and they are not just killing the bees. Anticoagulant rodenticides kill rodents by preventing their blood from clotting, causing internal bleeding and eventual death.  This poison is long acting, meaning the rodents live with the poison in their system for a while before dying. Because of this, rodents often get eaten by predators before it has time to take effect, passing the rodenticide into their predator’s system. As these rodenticides move up the food chain, they cause detrimental damage to wildlife in the area, profoundly affecting top-tier carnivores.  Many species of endangered and vulnerable birds of prey are being affected by anticoagulant rodenticide exposure, causing their population to drop to dangerously low levels. Wildlife experts predict that these new rodenticides will cause damage to the environment that may become this generation’s DEET.

12.The Balance. (2018). How Much Does Colony Collapse Disorder Increase Food Prices?. https://www.thebalance.com/bee-colony-collapse-disorder-facts-and-economic-impact-3305815

Previous Salmonella
Next Homework – A Poem