Lucerne is a famous city in Switzerland. It is a city surrounded by beautiful lakes, snow covered mountains and historic buildings. The Lucerne Festival is a series of classical music festivals which were founded in 1938. It includes the Summer Festival, the Easter Festival, and the Piano Festival. The festival started with the so-called “Concert de Gala” in the gardens of Richard Wagner’s villa at Tribschen in 1938 conducted by maestro Arturo Toscanini. He had formed an orchestra with members of different orchestras and soloists from around Europe, which was then called the Lucerne Festival Orchestra. It is an ad hoc seasonal orchestra based at the annual Lucerne Festival.

The largest festival is the Summer Festival (Lucerne Festival im Sommer). It takes place in August and September and features over 100 events. The famous Italian conductor, Claudio Abbado, led the first performance of the latest Lucerne Festival Orchestra at the 2003 festival. He then conducted the orchestra to perform at the festival every year until his death in 2014. In 2017, Berlin Philharmonic and Royal Concertgebouw Orchestra will be attending the Lucerne Festival in summer, along with maestros such as Emanuel Ax, Martha Argerich, and Maxim Vengerov. 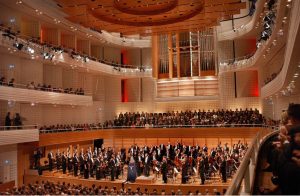 The Easter Festival was founded in 1988, and takes place two weeks before Easter, running through Palm Sunday each year. It is specifically focused on sacred music. Performances take place in churches throughout Lucerne.

The Piano Festival first took place in November 1998. It is a nine-day event that invites keyboard maestros for recitals, concertos, and chamber music. The “Piano Off-Stage!” programme forms a parallel series of jazz events found in bars around Lucerne.

At present, along with the Bayreuth Festival and the Salzburg Festival, the Lucerne Festival is one of three major classical music festivals in Europe and attracts around 110,000 visitors from around the world annually.

Previous The Year of Oil Drilling
Next Tips for Junior Year