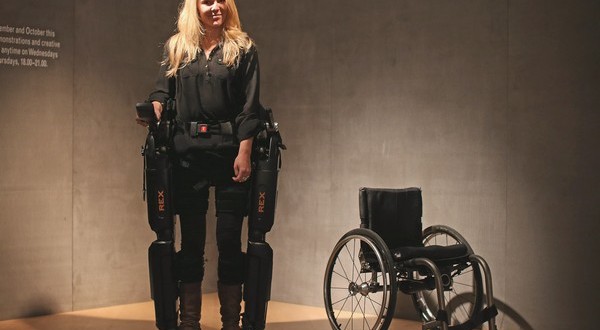 LONDON, ENGLAND - SEPTEMBER 19: Sophie Morgan walks with the aid of 'Rex', a Robotic Exoskeleton at the Welcome Trust on September 19, 2012 in London, England. The system allows wheelchair users including fully paralysed people, to stand upright and walk independently. Sophie was paralysed from the breast bone down in 2003 following a car accident. (Photo by Dan Kitwood/Getty Images)

SuitX, the robotics company out of Berkeley’s Human Engineering Lab, has launched its first exoskeleton after years of development. It’s called Phoenix, a relatively lightweight and affordable device that can help people with mobility disorders walk again. The wearable robot is adjustable according to size and can be put on and removed piece by piece. Its battery can power four hours of continuous walking (at a max speed of 1.1 mph) and up to eight hours of intermittent movement. The best part of the Phoenix, however, is that it only weighs 27 pounds and costs $40,000.

Now, 40k is still a lot, but its competitors cost much, much more than that. ReWalk, the most familiar one, will cost $77,000. Ekso Bionics, which was founded by the same person that founded SuitX, sold exoskeletons for over $100,000 apiece. The inspiration behind SuitX is that some graduate students “started suitX out of [their] passion to develop low-cost consumer bionic products to improve the quality of life for people around the world.” SuitX is now accepting pre-orders and aiming to ship out the first units in March.