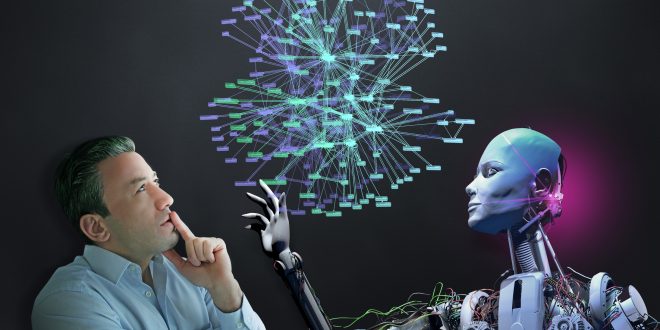 Human and robots to work together in the near future. This combination will accelerate developing technology. Businessman and cyborg organizes social media.

Recently, artificial intelligence (AI) has become the hottest buzzword on the Internet.  From computer scientists, neurologists, venture capitalists, talk show hosts, to even high schoolers, everyone is anticipating the new era of AI. In the world of AI, leading companies such as Google have shown people shocking results. For example, this year, Alpha Go, an AI product made by the Google Deepmind Division, crushed the world’s best Go champion Ke Jie 3 to 0 after only less than half of a year’s worth of data training. Even more amazingly, Alpha Go Zero (the next version of Alpha Go) beat the original Alpha Go 100 to 0 after only 40 days of training by only playing with itself and no human interaction! Keep in mind that Go is considered to be one of the most difficult games that mankind has invented over the course of thousands of years. But does this mean that current AI will overtake human intelligence?

Luckily (or unluckily depending on your perspective on AI), many AI scientists have pointed out that even the most advanced AI algorithms today are still considered as “weak intelligence”, in contrast to human intelligence as “strong intelligence”. For example, in order to correctly train the most powerful computer to recognize a picture of a dog from many other pictures of animals, it has to be trained with millions of animal pictures over a long duration of training. In contrast, a five year old child who has never seen a dog before only needs to see a dog picture about five times before they can correctly identify a dog with no mistakes. AI scientists have all agreed that compared to how the human brain functions, current AI models are still extremely limited and therefore won’t take over human intelligence in most cases anytime soon. However, that being said, AI has been proven to be a useful assistant to humans in certain areas such as financial fraud detection, online shopping recommendations, and many more. Just as how people welcomed calculators and computers in their life decades ago, people should be just as open minded to AI.