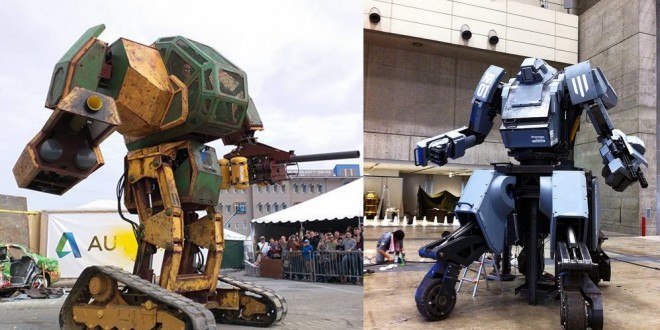 In July, the US challenged Japan to a giant robot battle. Welp. Megabots, an American robotics company, challenged Suidobashi Heavy Industry to a robotic fight to the death. America’s robot weighs 6 tons, is piloted by 2 people, and can shoot paint cannonballs at 100 mph. It looks like a big, walking tank with big guns strapped to the side. Japan, however, is going for a more melee approach. The robot has 3 legs with wheels on them, has a HUD display, a custom targeting system, and is controlled by 1 person. It is more mobile than the American robot, but presumably more delicate.

Said Suidobashi, “If we’re gonna win this, I want to punch them to scrap and knock them down to do it.” Pretty violent. However, this does not mean that the Japanese robot don’t have guns either. Mounted with 2 gatling guns, it will be a tough fight.

After the duel was announced by Megabots and Suidobashi accepted, the internet exploded. Everyone was excited to watch big robots beat each other up and shoot the other to shreds, thinking of the fights in Pacific Rim. However, it will not be like that. With machines so big, it is very difficult to move very quickly or do any real melee damage. Not to mention that because how complex the electronic elements are, any kind of damage to them may break down the whole robot. So, though it may not look as epic as modern movies, it will still be very cool to watch. Personally, I think that the Japanese robot will win, as Japan is known for huge fighting robots. As Suidoboshi said, it is “part of Japan’s culture”. Anyways, it’ll be an amazing fight to watch, and I can’t wait to see what happens.