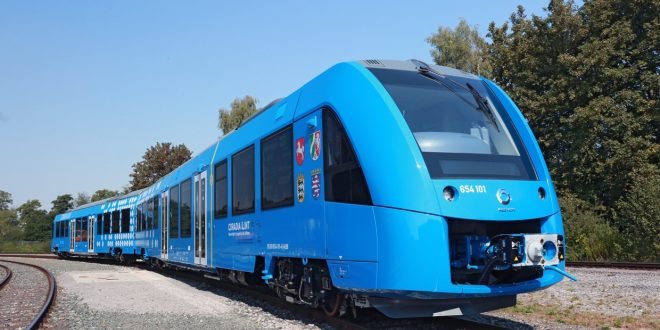 In Europe, the world’s first hydrogen trains have been launched. According to Alstrom, the railway manufacturer who built the trains, they will be low noise and zero emission. These trains are known as the Cordia iLint, and they are set to be used on railways between four German cities. This is a push to challenge the reign of diesel trains, to eventually replace them with more environmentally friendly hydrogen trains. These trains are powered by electricity released from the combination of hydrogen and oxygen, making their only emissions water and steam. Any excess energy will be stored in batteries on the train.

With many European cities looking to battle increasing air pollution, this train is a perfect way for them to cut down on emissions. Diesel powered trains produce large amounts of carbon-dioxide and greenhouse gases that cause serious health problems.  It may seem like fueling these hydrogen trains will be much more expensive than diesel trains, and much less efficient, but in reality, a tank of hydrogen has as much range as a diesel one, and is actually cheaper than diesel. Hydrogen itself is an abundant resource than can be produced through hydrolysis requiring only electricity and water. Natural gas is also already a large source of hydrogen. These trains are also not inferior to diesel ones in terms of speed, with a max speed of 87 mph.

There are plans for Alstrom to build 14 more of these hydrogen trains for use in Germany by 2021, and they hope to expand the use of these trains throughout Europe. Other European countries have expressed interest in these trains, and France wants to have one running by 2022. Alstrom believes that hydrogen trains can be viable throughout the world, and will be a step towards a greener future.

Previous The Wall Dilemma
Next Is Chemotherapy’s Days Numbered? — Advancements in Cancer Treatment